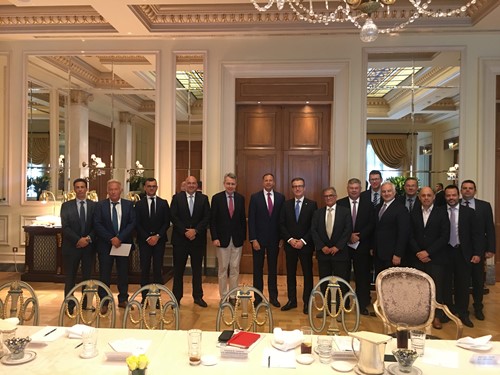 The discussion took place at the Grande Bretagne Hotel in light of the visit of US Assistant Secretary of State Francis Fannon who was the honorary guest. His Excellency the US Ambassador Geoffrey Pyatt was among the participants accompanied by Embassy officials, as well as the President of the American-Hellenic Chamber of Commerce Mr. Nikos Bakatselos, the President of the Chamber's Energy Committee and Chairman of the Hellenic Association for Energy Economics Dr. Kostas Andriosopoulos, while top executives of distinguished Greek and American energy companies made up the list of participants.

During the discussion, both American officials expressed their optimism after their initial meetings with members of the newly appointed Greek government and reiterated the strong commitment of the US government to continue and enhance cooperation at all levels, both public and private, in order to strengthen american investments in the energy sector in Greece.

Mr. Bakatselos stressed the traditional role of the American-Hellenic Chamber of Commerce in promoting US - Greek cooperation in the energy sector with various initiatives such as the Southeast Europe Energy Forum which will be taking place again this year in the beginning of September in the framework of the Thessaloniki International Fair.

Under his role as President of the Chamber's Energy Committee, Dr. Andriosopoulos spoke about the critical issues and current and future trends in the energy sector and informed Ass. Secretary Fannon on the projects in place that shape the energy landscape in the wider region, as well as the estimations and projections of the Hellenic Association for Energy Economics regarding the course of investments, and called upon the increase of efforts to further support US-led investments in the field.

The US government delegate also had the opportunity to hear the opinions and suggestions of some of the most important players in the energy market and get a detailed overview of how the sector operates and what needs to be done hereafter.

All sides agreed to keep in close contact and proceed with common efforts that will ultimately lead to the further enhancement of US - Greek energy relations and the promotion of investments that will secure Greece's and Europe's energy diversification and security of supply.