The lifting of the Saudi-led blockade against Qatar is a real victory for this plucky Arab Gulf State and also a victory for coomon sense. Not only it has emerged from the blockade with a more resilient and stronger economy but also one of the few countries in the world to run a fiscal surplus in 2020.

And whilst the COVID-19 pandemic has wreaked havoc on most countries around the world, especially the oil rentier states in the Arab Gulf, Qatar has fared a lot better than most of its neighbours according to the International Monetary Fund (IMF).

On 4 January 2021, Qatar and Saudi Arabia agreed to a resolution of the crisis brokered by Kuwait and the United States. Saudi Arabia will reopen its border with Qatar and begin the process for reconciliation. An agreement and final communique signed on 5 January 2021 following a Gulf Cooperation Council (GCC) summit at Al- Ula in Saudi Arabia marked the end of the crisis and the lifting of the blockade on Qatar.

The Qatar diplomatic crisis began on 5 June 2017 when Saudi Arabia, UAE, Bahrain and Egypt severed diplomatic relations with Qatar and banned Qatar-registered planes and ships from using their airspace and sea routes along with Saudi Arabia blocking Qatar’s only land crossing. The Saudi-led coalition cited Qatar’s alleged support for terrorism, Aljazeera TV network and relations with Iran as the main reasons for their actions, alleging that Qatar had violated a 2014 agreement with the members of the GCC of which Qatar is a member. Qatar denied the allegations. Iran and Qatar share the giant North/South Pars gasfield, the world’s largest offshore field and they have no alternative but to cooperate in coordinating production and drilling (see Map 1).

Despite enforcing the blockade for over three years, the Saudi-led coalition has not produced a shred of evidence to support their allegations. The climbdown is a clear admission that the coalition has failed to prove its case thus coming under international pressure to end what is now seen as a failed attempt to undermine an increasingly successful and assertive Qatar through subterfuge.

This is not the first time that members of this coalition, particularly Saudi Arabia and the UAE, have united to try to destabilize Qatar. This Arab Gulf Cold War can be traced back to February 1996, when an attempted coup to overthrow the then Emir Hamad bin Khalifa Al Thani, was foiled by Qatar's intelligence service. The Qatari Emir had been implementing important reforms, including making steps towards a democratically elected Parliament and a radical strengthening of its press freedom, leading to the creation of the Al Jazeera news network in November of that year. Such freedoms were seen as potentially destabilizing for Qatar's rivals in the region.

Amongst other things, Qatari economic liberalisation leading to rapid wealth creation, its fiercely independent foreign policy and its growing military ties with the United States, hosting al Udeid airbase, the largest US military base in the Middle East where some 10,000 US troops are based, have drawn the ire of UAE and Saudi Arabia against Qatar’s rising influence.

Their efforts were designed to justify first the blockade and then to provide the prelude to a Saudi-led ground invasion of Qatar to topple its reforming government, seeking to end the threat of change in the region. This was foiled by Turkey deploying forces to Qatar to defend it against such invasion.

The lifting of the blockade suggests that the Saudi Royal Family has belatedly realized the futility of continuing with a failed blockade, the need to improve relations with its neighbours and also concern about a possible cooling relations with the United States under President-elect Biden. This marks a distinct moment in this conflict, a vindication of Qatar's steadfast refusal to back down in the face of unlawful blockade.

Only time will tell whether this is a turning point in Arab Gulf prosperity and a signal of a serious attempt to invigorate the GCC and start of a rapprochement with Iran.

Impact of the Blockade on Qatar

The blockade caused a lot of shipping inconvenience for Qatar and added to the shipping costs of its crude oil and LNG exports to the world. For instance, the UAE banned Qatar-flagged ships from calling at Fujairah and also banned vessels at the port from sailing directly to Qatar. Similar restrictions were put in place at Jebel Ali, which prior to the blockade used to handle over 85% of shipborne cargo for Qatar. Bahrain, Egypt and Saudi Arabia also banned Qatar-flagged ships from their ports.

In the days and weeks following the blockade, cargo ships and hundreds of planes laden with food from Turkey, Iran, Oman, Morocco and India entered Qatar to ensure there were no critical shortages of supplies.

Three years into the blockade, Qatar has ramped up local production allowing the tiny Gulf State to not only overcome the challenges of the siege but also weather plunging oil prices and a deadly pandemic.

With Qatar reliant on imports for 90% of its food at the time, it had to act quickly to counter the effects of the blockade. Nearly 80% of Qatar's food requirements come from Gulf Arab neighbors and even imports from outside the Gulf States usually crossing the land border with Saudi Arabia.

Qatar achieved the top spot for food security in the Middle East and is ranked 13th globally in the latest Global Food Security Index compiled by the Economist Intelligence Unit.

Less than six months after the blockade, Qatar inaugurated the Hamad Port – arguably the largest in the Middle East. The port played a key role in securing new marine routes and ensuring basic supplies and commodities were made available.

The national carrier of Qatar, Qatar Airways, has had to reroute its flights to Africa and Europe via Iran, paying a “hefty” overflight fees.

The blockade forced Doha to turn to other countries to circumvent the impact of the siege. Consequently, Qatar is much closer to Turkey and Iran. The trade balance between Qatar and Turkey dramatically increased as a result, reaching $2bn between 2017 and 2018.

Since the blockade, Qatar has also implemented a military agreement with Turkey, first signed in 2014, allowing for the expansion of Ankara’s military presence in Qatar.

While Qatar may have incurred heavy financial losses as a result of the blockade – estimated at $43 bn – it has become significantly more independent and ready for the challenges posed by the COVID-19 pandemic.

The Economy of Qatar

At the time of the blockade, the International Monetary Fund (IMF) said it was too soon to judge its impact on Qatar’s economy. In the first months following the crisis the government injected $38.5 bn, which was equivalent to 23% of Qatar’s GDP to support the country's economy and its banking sector.

By 2019 the IMF was saying that Qatar’s economy has proven resilient amid the blockade and shocks from the 2014-16 drop in oil prices.

The pandemic has had an immense impact on most countries around the world, especially the oil rentier states in the Arab Gulf. However, Qatar has fared a lot better than most of its neighbours according to the IMF. The Qatari government noted the country will be one of the few in the world to run a fiscal surplus in 2020.

Qatar is the world's leading exporter of liquefied natural gas (LNG) and holds the third largest gas reserves in the world estimated at 13% of the global total.

Moreover, Qatar has a fully integrated LNG industry meaning it has the world’s third largest proven natural gas reserves after Russia and Iran and fully owned and paid for LNG plants and LNG shipping fleet. It is also the world’s largest producer and exporter of LNG and the cheapest producer. Qatar’s economy is thus heavily focused on the gas industry, which represents two-thirds of its GDP and almost 80% of export earnings.

According to the updated IMF forecasts from the 14th April 2020, GDP growth fell is to -4.3% in 2020 but it will pick up to 5% in 2021 underpinned by a post-pandemic global economic recovery and an expected boom in the services sector ahead of the FIFA 2022 World Cup (see Table 1). 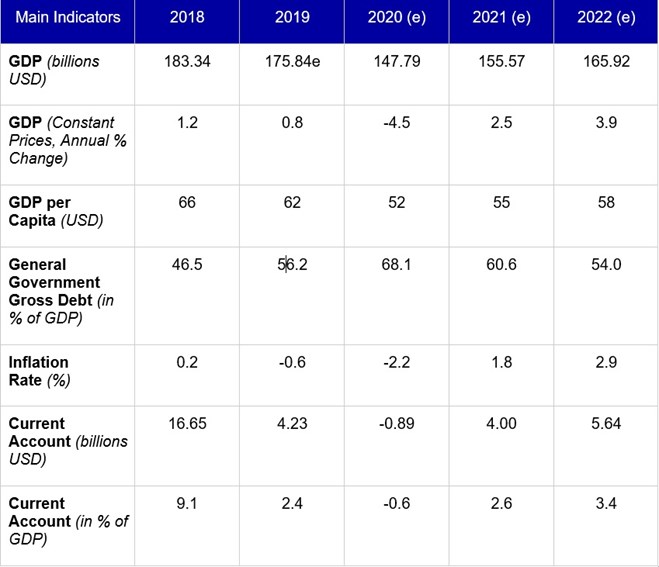 In the medium term, the expansion of North Field gas projects is expected to be completed by 2024, further boosting gas output. Qatar has been implementing an economic diversification programme to lower its dependency on the hydrocarbon sector, and in December 2018 the country announced it would leave OPEC in January 2019 to focus its efforts on natural gas. New projects are planned in infrastructure and telecommunications along with various construction projects in progress in preparation for the World Cup in 2022.

Qatar is overall a politically stable, rich country. In 2018 it enjoyed the world’s highest income per capita according to the World Bank.

Industry accounts for 54.4% of the economy while the services sector based mainly on financial services is estimated to account for 44.5% of GDP. Tourism is also a growing sector which will account for 4% GDP by 2023 (see Table 2).

The lifting of the blockade could signal a new era in the relations between Gulf States, a strengthening of the GCC and a major contribution of Qatar’s gas wealth to the diversification of both Saudi and UAE diversification plans.

Geopolitically, it could pave the way to a rapprochement between the Gulf States and Iran and a lessening of tension in the Gulf region as well as an end to the war in Yemen.