On Friday the 17th of September 2021, the 5th Southeast Europe Energy Forum was held for the fifth consecutive year, at the MET Hotel in Thessaloniki, by the Hellenic-American Chamber of Commerce and the Hellenic Association for Energy Economics in collaboration with the US Embassy in Greece and the strategic partnership of the Atlantic Council and the US Chamber of Commerce.

The role of Greece and the investment opportunities in the energy sector was the main topic of the discussion, while at the same time, innovative plans and smart services for further utilization and exploitation of green energy were presented. The Forum focused on new partnerships and the development of green innovation, on advances in energy-related materials and processes, smart energy management tools, and on the infrastructure needed to adapt to climate change and conserve the ecosystems.

The strong collaborations of the Hellenic-American Chamber of Commerce with the US institutional and business ecosystem, in combination with the presence of leading figures of the political, business and academic community from Greece and Europe, set the basis for a fruitful dialogue, and mapped out the next steps. The US ambassadors to Greece, Bulgaria, Albania, northern Macedonia and Serbia stressed the importance of the energy sector in the wider region of SE Mediterranean. The Ambassadors highlighted the investment perspective for the next day and presented the main pillars of their energy strategy in the region.

Nikolaos Bakatselos, President of the Hellenic-American Chamber of Commerce, stated: "Regional alliances and cooperation in the field of energy, determine the geopolitical developments in the region of SE Europe. Climate change is now creating a new environment that must be addressed immediately and effectively. The agenda of the 5th Southeast Europe Energy Forum is centralizing the opportunities and risks posed by the current geopolitical developments, the role of regional markets and investment initiatives in SE Europe, the deeper utilization of alternative energy sources, the European Green Deal, the increase energy costs and the supply chain, and the impact of digitization and automation in the energy sector. The role of Greece and the investment prospects have been upgraded, giving a significant boost to the country's economy. Greece is called upon to face new challenges and to utilize its geopolitical advantage in order to achieve its sustainable development goals".

Elias Spyrtounias, General Manager of the Hellenic-American Chamber of Commerce, stated: "We are witnessing profound changes in the energy sector: oil and gas reaching high prices, while for raw materials’ rising prices affect the prices of goods and the whole chain, directly affecting the economies in Europe and all over the world. The profound signs of climate change are leading the EU, the US and most of the developed countries to legislate even greater reductions in gaseous emissions, to rapidly develop and utilize their renewable energy sources and to further implement innovative new technologies in the automotive industry, and in shipping and transport in the field of energy efficiency ".

Kostas Andriosopoulos, Chairman of the Energy Committee of the Hellenic-American Chamber of Commerce, noted: "Many of the projects we have worked on and presented in previous forums, are actually being implemented. "The cooperation between Greece and its neighboring countries in gas infrastructure projects or electricity interconnections, are becoming a reality."

Kurt Donnelly, Undersecretary of State for Economic Diplomacy at the US State Department, SBO, stressed: "We have a bilateral strategic dialogue with Greece to advance our common interests in many areas, and mainly in the energy sector. We met in summer and discussed achievements such as the completion of the Southern Gas Corridor, but also the support of Greece's role as a leader of regional transformation and cooperation. I talked to Minister, Mr. Skrekas, and congratulated him on the vision that Greece has brought to this issue, emerging as a frontier, and pointing the way for best practices sharing and cooperation.

The US Ambassadors, in Greece Geoffrey R. Pyatt, in Albania Yuri Kim, in Northern Macedonia Kate Mary Byrnes, in Bulgaria Herro Mustafa and in Serbia Anthony F. Godfrey shared their opinions upon Greece's cooperation with its Balkan neighbors. According to them the regional cooperation is the key in providing alternatives to the traditional Russian gas monopoly, and in exploiting opportunities offered by the energy transition.

Geoffrey R. Pyatt, US Ambassador in Greece, declared: "The need for diversification of energy sources is not just a matter of the national strategy but it concerns the wider region. "The role of Greece is crucial for the development of a wide network of cooperation, aiming to ensure a secure energy future, free of monopolies."

The Ambassador of the United States to Serbia, Anthony F. Godfrey, stated: "Serbia is a large market with great challenges and opportunities. "Serbia's dependency on lignite for energy production is up to 70%."

One her side, Yuri Kim, US Ambassador to Albania, noted: "Energy production in Albania occurs almost exclusively from hydropower plants and although it is a renewable energy source, it depends mainly on the weather and in particular on the amount of annual rainfall, which makes the country short on electricity ".

The US Ambassador to Bulgaria, Herro Mustafa, stressed: "Energy security is intertwined with national security. "If Bulgaria manages to diversify its energy sources, it does not only mean a stronger Bulgaria, but also a much stronger region."

It is worth noting that during the 5th Southeast Europe Energy Forum 2021, DESFA and NER JSC SKOPJE, signed a Cooperation Agreement for the development and construction of the Greece-North Macedonia Gas Interconnector, in the presence of the Greek Minister of Environment and Energy, Kostas Skrekas, the General Secretary for Energy and Mineral Resources, Alexandra Sdoukou and the US Ambassador to Greece, Geoffrey Pyatt. The cooperation agreement sets the principles of mutual aid, according to which DESFA and NER intend to coordinate the main phases of the project, the respective commitments and the accompanying milestones of the development of the gas pipeline interconnection project.

Maria Rita Galli, CEO of DESFA, pointed out: "Today's signing of the Cooperation Agreement between DESFA and NER gives a significant impetus to the development of a mutually beneficial project for Greece and Northern Macedonia, while it is further establishing the role of DESFA as a catalyst for the transition of the region of Southeast Europe to an interconnected and sustainable energy future. DESFA remains faithful to its vision to place Greece at the core of energy developments, with the opening of new energy roads and the transformation of Greece into an international energy hub of a sustainable, secure and cost-effective European market. "

On his side, Bajram Rexhepi, Executive Director of NER JSC SKOPJE, said: "By signing this agreement, the last and very important steps towards the realization of the gas interconnection have been made”.

Kostas Skrekas, Minister of Environment and Energy of the Hellenic Republic, from the podium of the 5th Southeast Europe Energy Forum, stated: “The gas pipeline will enhance the strategic geopolitical role of Greece, which is steadily establishing itself as an energy crossroads and an Energy Hub Southeast Europe. At the same time, it will enable our northern neighbor to reduce its environmental footprint by gradually replacing more polluting fuels with natural gas and contributing to the overall European goal of a climate-neutral European economy by 2050. The project is important as it will be a lever development for the economies of the two countries, by creating thousands of jobs during the construction of the pipeline ".

Alexandra Sdoukou, Secretary General of Energy and Mineral Resources of the Ministry of Environment and Energy underlined: "In the coming weeks, we will present a Draft Law, with further simplifications in the licensing process. We have completed the preparatory work and will proceed with a discussion with the interested parties before bringing it to Parliament. We believe that a scheme that will support renewable energy sources is the most effective way to further boost their growth".

The Minister of Energy of Bulgaria, Andrey Zhivkov, pointed out: "The improvement of infrastructure in the region and in the energy sector is a precondition for the deepening of economic cooperation between the countries. This process has long-term results, creates new supply chains, new jobs, and improves the well-being of our society ".

The Minister of Energy, Trade and Industry of the Republic of Cyprus, Natasa Pileidou, participated through video conference and noted: "Natural gas plays an important role in the region, it will allow the transition of Cyprus and the countries of the region to green energy. "All the countries in the region are giving priority to this issue and are taking quick and impressive steps in that direction."

In a videotaped salute, Zorana Mihajlovic, Serbia's deputy prime minister and energy minister, stated: "The recent rise in gas prices is a reminder that we can only have energy security and stability if we are supplied by different pipelines and suppliers."

The interesting discussion ended with the positions of Konstantinos Frangogiannis, Deputy Minister of Economic Diplomacy and Extroversion and Maria DiGiulian, Acting Deputy Assistant Secretary for Europe, Eurasia, Africa, and the Middle East US Department of Energy, highlighting the role of the energy sector in diplomacy and in countrys’ relations. The panel was moderated by Elias Spyrtounias, General Manager of the Hellenic-American Chamber of Commerce.

You can watch the event at this link:https://www.youtube.com/watch?v=LvoXYk6Hmyo 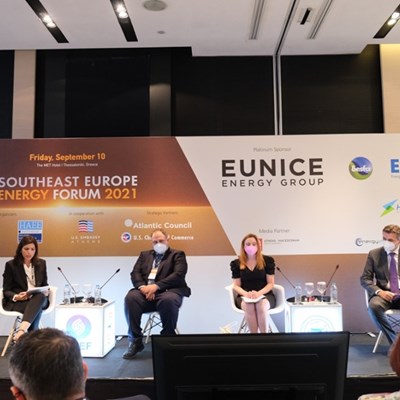 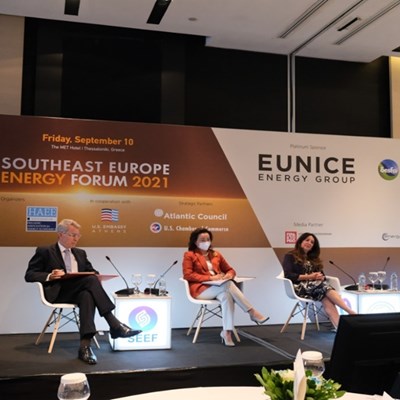 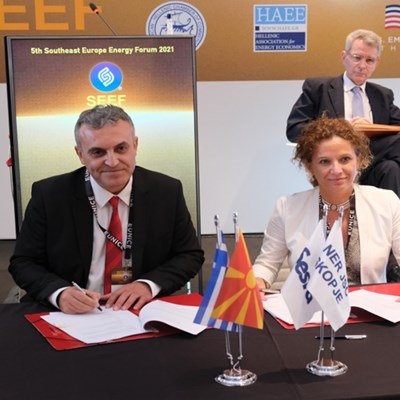 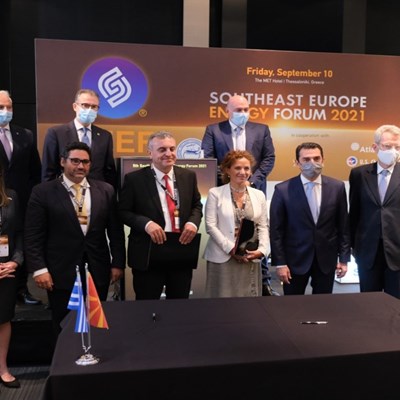 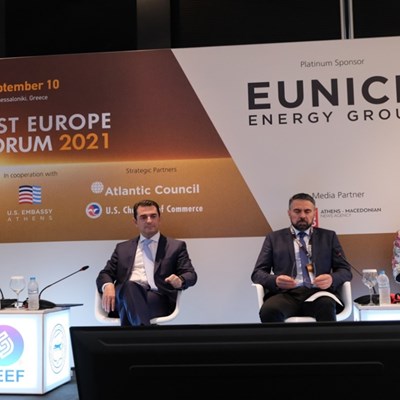 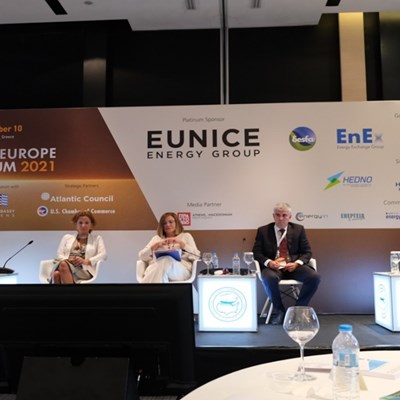 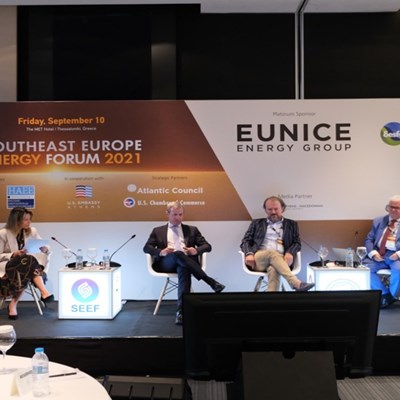 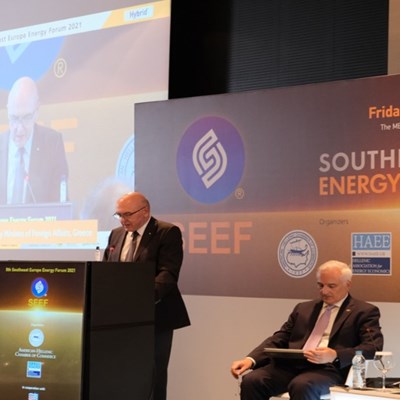