4th Symposium of HAEE: In anticipation of all developments in Greece

More than 100 distinguished speakers from international and national companies, organisations, think tanks, academic institutions and bodies will discuss during this year's conference regarding all current energy issues that HAEE organises for the fourth consecutive year.

The energy transition towards a low carbon - and finally a zero carbon - economy is one of the toughest and most demanding missions ever attempted by a society. Therefore, Europe's decision to play a leading part in the whole process of disconnecting CO2 emissions from economic growth, constitutes a huge challenge with many energy, economic, social and environmental repercussions. In this effort, public dialogue plays a crucial part for informing every citizen and energy professional, in order tο understand the new, unfolding realities and be able to respond to the necessities of the new era. Within this framework, the Hellenic Association for Energy Economics (HAEE) organizes on May, 6-8, the 4th Annual Symposium in the Divani Caravel Hotel in Athens. The goal of the Symposium is to highlight all dimensions of the energy transition, technological innovations, policies and new regulatory frameworks in the sector, as well as business positions. In order to achieve this, the Symposium will host experienced executives from the entire energy spectrum, officials and representatives from public bodies, specialized scientists, academics and analysts who will provide a full picture of the Greek, European and international markets. According to HAEE's chairman, Dr. Kostas Andriosopoulos, "after the success of the previous years' events and given the importance of recent developments in the indigenous energy sector, this year's Symposium is eagerly expected. In particular, more than 100 presentations are expected to take place, covering the entirety of energy sectors, i.e. power, natural gas, renewables, oil and energy saving, but also their relationship to the environment, the economy and society as a whole".
In this May's Symposium, more than 100 speakers from over 40 Greek and international companies, 15 organizations and think tanks, 10 top Greek and global academic institutions and over 15 regulatory and public bodies will shed light on the crucial energy issues of our region in about 25 sessions during the conference's three day length. More specifically, from the international energy scene, there will be speakers from DG Energy and DG Environment, banking institutions such as EBRD, World Bank/IFC, NBG, ENEX, HRAF, US Congressional Research Service, as well as ambassadors, ministers from other countries and executives from top European and global corporations such as Enagas, Fluxys, GE, Suntech Power, Total, Engie, Saipem, Enel, Naturgy, Scale Gas, Enedis, Akuo Energy, Snam, Energean, Siemens-Gamesa and of course, high level executives from IAEE. On the Greek side, representatives of the government will participate, such as the energy minister, a representative from the foreign ministry, party leaders, heads of energy policy from the opposition and other parties, regulatory authorities, such as RAE, academics, members of HAEE, executives from public and private corporations, such as PPC, HEDNO, ADMIE, HHRM, HELPE, DESFA, DEPA, EPA Attica, EDA Attica, EDA Thessaloniki-Thessalia, Natural Gas Attica, A+ Insurance Brokers, Nostira, ZeniΘ and others, while especially important is the strategic partnership with top global think tanks like the Global Gas Centre, Atlantic Council, S&P Platts, REN21 and recognized business associations and chambers (Greek- American, Greek-French, Greek-Russian, Greek-Italian, Greek-Spanish, SBE, STHEV, PCCI).
Moreover, the strategic partnership with academic institutions and media organizations is vital for the Symposium's success (for the full list of sponsors and supporters of the Symposium, see the attached file).
HAEE will continue to inform its members and the public about participants and presentations taking place this year, as preparations are entering the final stretch and the Symposium's final program will be soon announced. You can find more information about the 4th Annual Energy Symposium, its sponsors and supporters, as well as the list of speakers as it currently stands, in HAEE's webpage and in its social media pages in Facebook, Twitter, LinkedIn and Youtube.

We propose that you watch TEASER VIDEO of the 4th ANNUAL SYMPOSIUM at the following links and share on Social Media :

You may also watch the mini interview teaser videos within the framework of the Symposium: Speakers' Teaser Interview Videos

Below you may find the Sponsors & Partners of the 4th Annual Symposium. 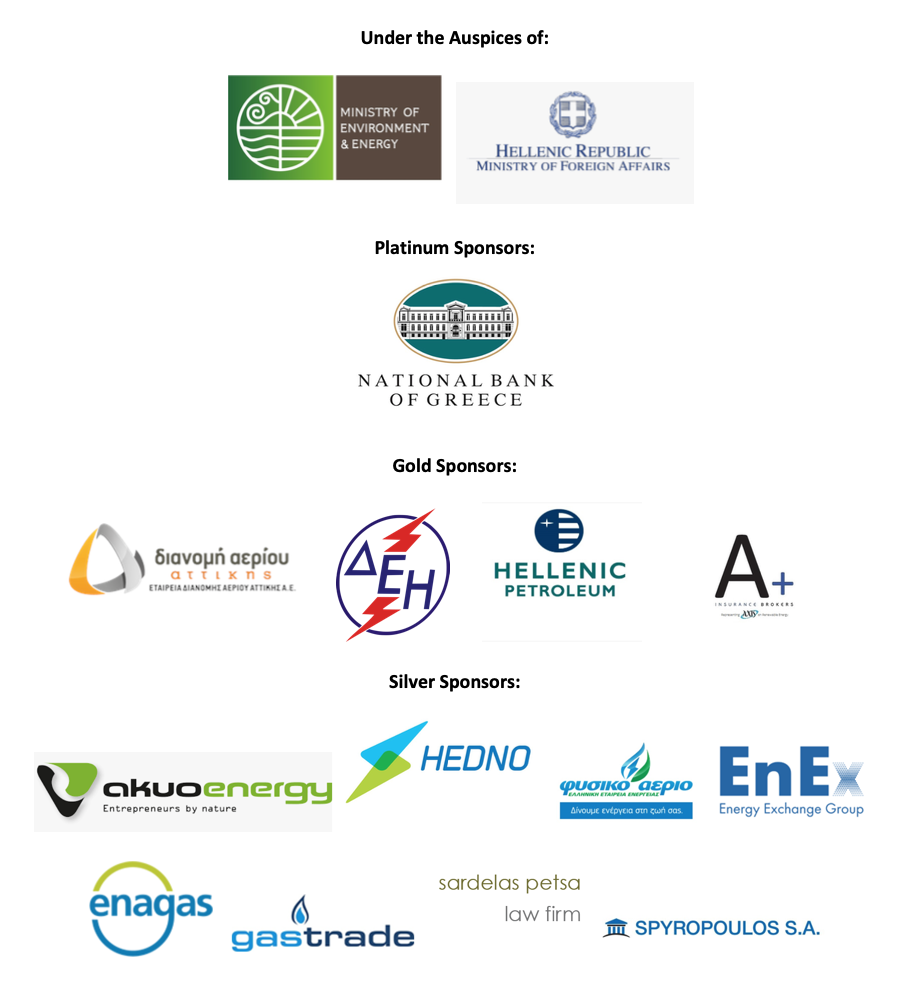 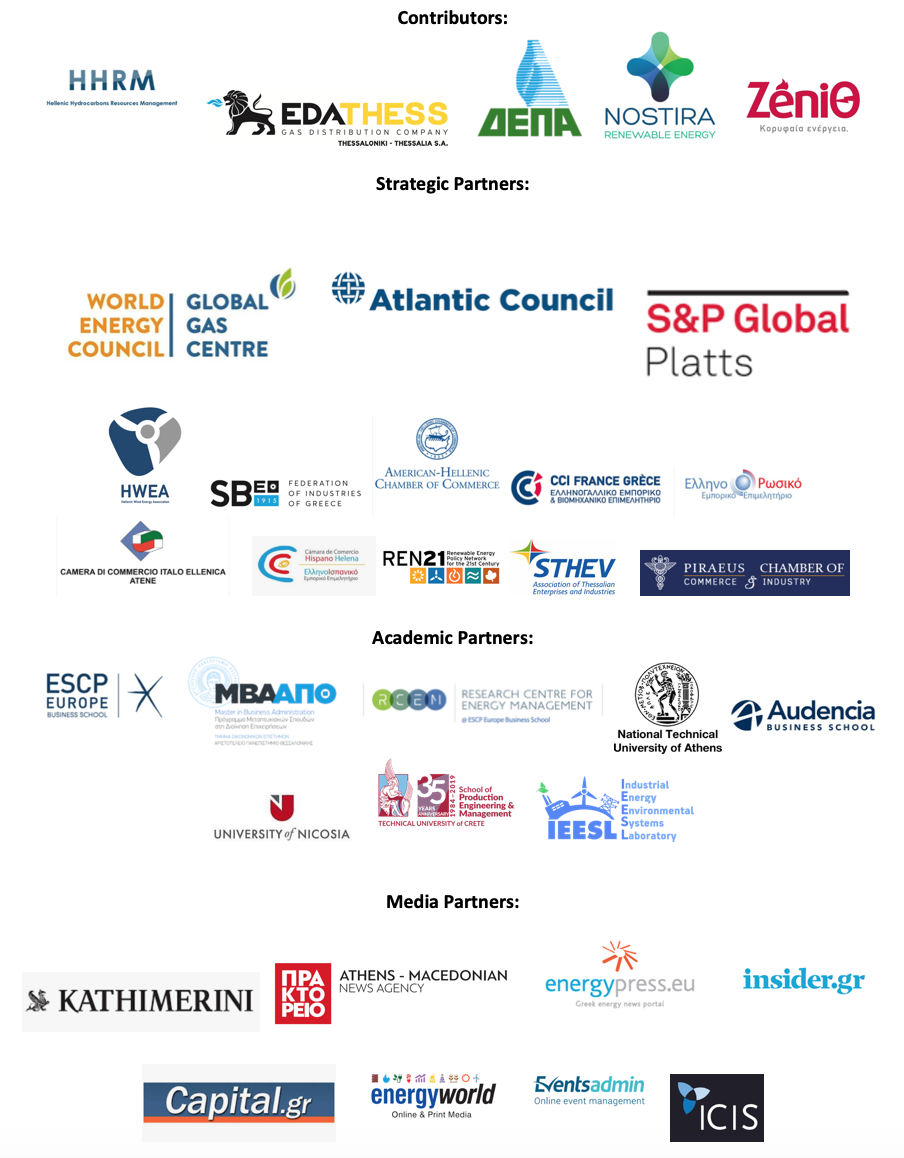