Emilios Galariotis is full Professor of Finance at Audencia Business School (EQUIS, AMBA, AACSB), France. He is also the Founder and Director of the institute of Finance and Head of the Finance Department, while he has served as Head of the Research Axis "Finance, Risk and Accounting Performance" and Joint Head of the Department of Accounting and Finance in the past. He also founded and directed the Centre for Financial and Risk Management (CFRM). Prior to serving in his present
position, Dr. Galariotis was a faculty member at Durham University Business School (EQUIS, AMBA, AACSB), UK, where he was also Director of the MSc programme in finance.

Emilos Galariotis was born in 1973 in Patras, Greece and was raised up in Nigeria. Returning to Greece he attended the 2nd Gymnasium and the 3rd Lyceum of Patras and the Panteion University of Social and Political Sciences graduating with a four-year BA degree in Political Sciences and International Relations in 1997. He went on to successfully pursue a Diploma in Business Economics and a Masters in Money Banking and Finance from Middlesex University Business School with distinction, and a PhD in Financial Economics at Durham University. He received his Doctorate in 2003, two years after his wedding in 2001 with Nikolitsa Zenteli. In 2006 their daughter Irini was born and in 2007 their son Vasileios followed, both in Durham UK, while Dr Galariotis was serving as a lecturer and senior lecturer at Durham University. In 2013, Professor Galariotis obtained his «Habilitation à Diriger des Recherches Sciences Economiques» from the University of Nantes in France, “the highest academic qualification a scholar can achieve by his or her own pursuit” Wikipedia.

He serves on the boards of various journals including the Review of Behavioral Finance and is Associate Editor of IJFERM, while he is also a member of the board of Directors of the Financial Engineering and Banking Society and founding member of the Hellenic Association for Energy Economics. He has acted as reviewer for governments and institutions for projects and programmes (examples, ESRC, HQA, Russell Group etc.), while he has successfully led research bids above a million Euro. He has organised international conferences, round tables, and has chaired/participated in various scientific committees and reviewed for various journals. His research has received best paper awards and funding, several SSRN top- 10 download positions (ranked top 5% for downloads). His work has been published in more than 35 articles in journals such as the: European Journal of Operational Research; Energy Economics; Technological Forecasting and Social Change; Journal of Banking and Finance; Journal of Financial stability; Annals of Operations Research; European Financial Management; Journal of Business Finance and Accounting; International Review of Financial Analysis; Journal of Development Studies; European Journal of Finance; International Review of Financial Analysis; Journal of International Financial Markets, Institutions & Money etc. He has edited a Book in the Frank J. Fabozzi Series and written in Wiley Encyclopaedia of Management among other contributions.
In 2015 he was invited by the University of Cambridge Institute for Sustainability Leadership on behalf of His Royal Highness the Prince of Wales to talk on sustainability and the future of finance teaching. In 2008 he was honoured as a new decision maker in the west of France by the “Centre de Communication de l’Ouest”, while he has received publicity in various countries from outlets such as the Times, Les Echos, Le Figaro étudiant, L’EXPRESS, Kommersant, the World Finance Magazine, Le Journal des Grandes Ecoles, Biz Ed (AACSB’s magazine), Kathimerini, to Vima, Naytemporiki, International Finance News (China) etc. 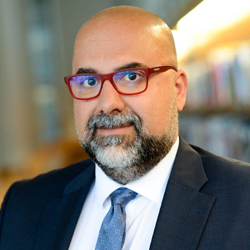