Responding to the requests from abroad to address the serious gap in the comprehensive briefing of the British and global energy community on the Greek-Cypriot dip type and their combinatorial capabilities, the HAEE - the Greek Think Tank for Energy Economics - as the Greek affilite of the international think tank based in the US, IAEE, has used well-known representatives of the market, state, political and academic life, and presented in London the Greek and Cypriot activities covering the full spectrum of the energy sector.

In this integrated approach to the energy developments in Greece and Cyprus, entitled "Energy Developments in S.E Europe: Riding the Global Trends", in London, on November 28, 2017, important factors were contributed:

Aware of the international academic network of the well-known French economic university with close links to the French Industrialists Association and the French Ministry of Finance, ESCP Business School, based in Paris, with branches in London, Madrid, Berlin, Turin and Warsaw. The event was organized in collaboration with the postgraduate studies at the London Research Center for Energy Management, headed by the President of HAEE, Dr. Kostas Andriosopoulos, who also coordinates the energy teaching of the other departments of the complex. The international network of energy agents in the Eastern Mediterranean region is informed about developments in the ESCP network, which, apart from academic completeness, also has the advantage of being directly connected to the energy market .

Cyprus was represented by the candidate for the presidency in the forthcoming elections, Nikolas Papadopoulos, who has experienced the whole energy course of the island. The particular value of his contribution at the London conference lies in the fact that he was a candidate for President of Cyprus with a great chance of electoral success, presenting with realism what can and should be done on the island, with the possibilities and conditions prevailing today. 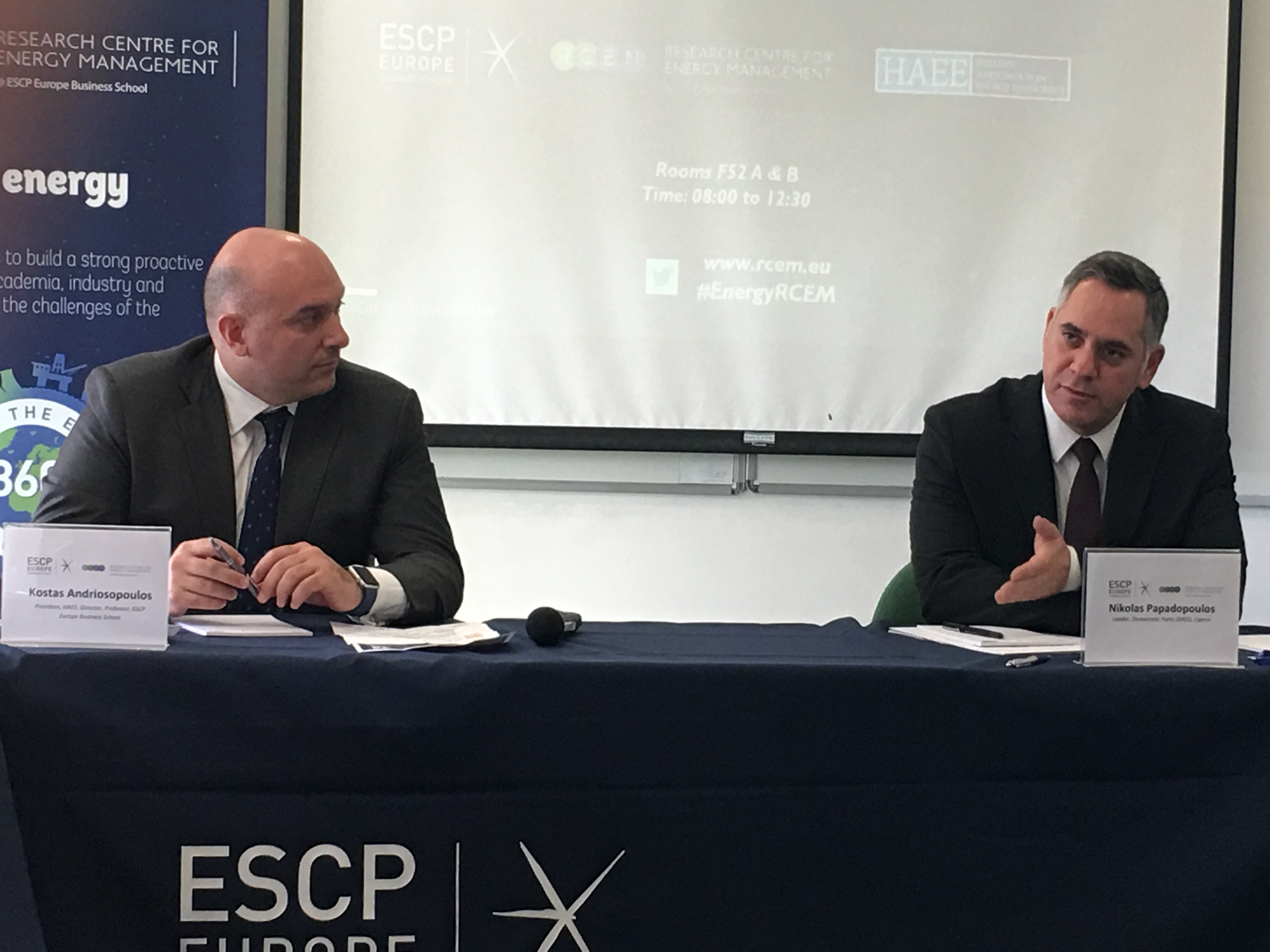 The energy future of Greece was presented by HHRM President, Giannis Basias, who analyzed the data on the existence of hydrocarbons in the Greek marine and terrestrial environment and underlined the positive prospects for their exact localization and exploitation, both for Greece and the foreign companies that have to invest in our region. 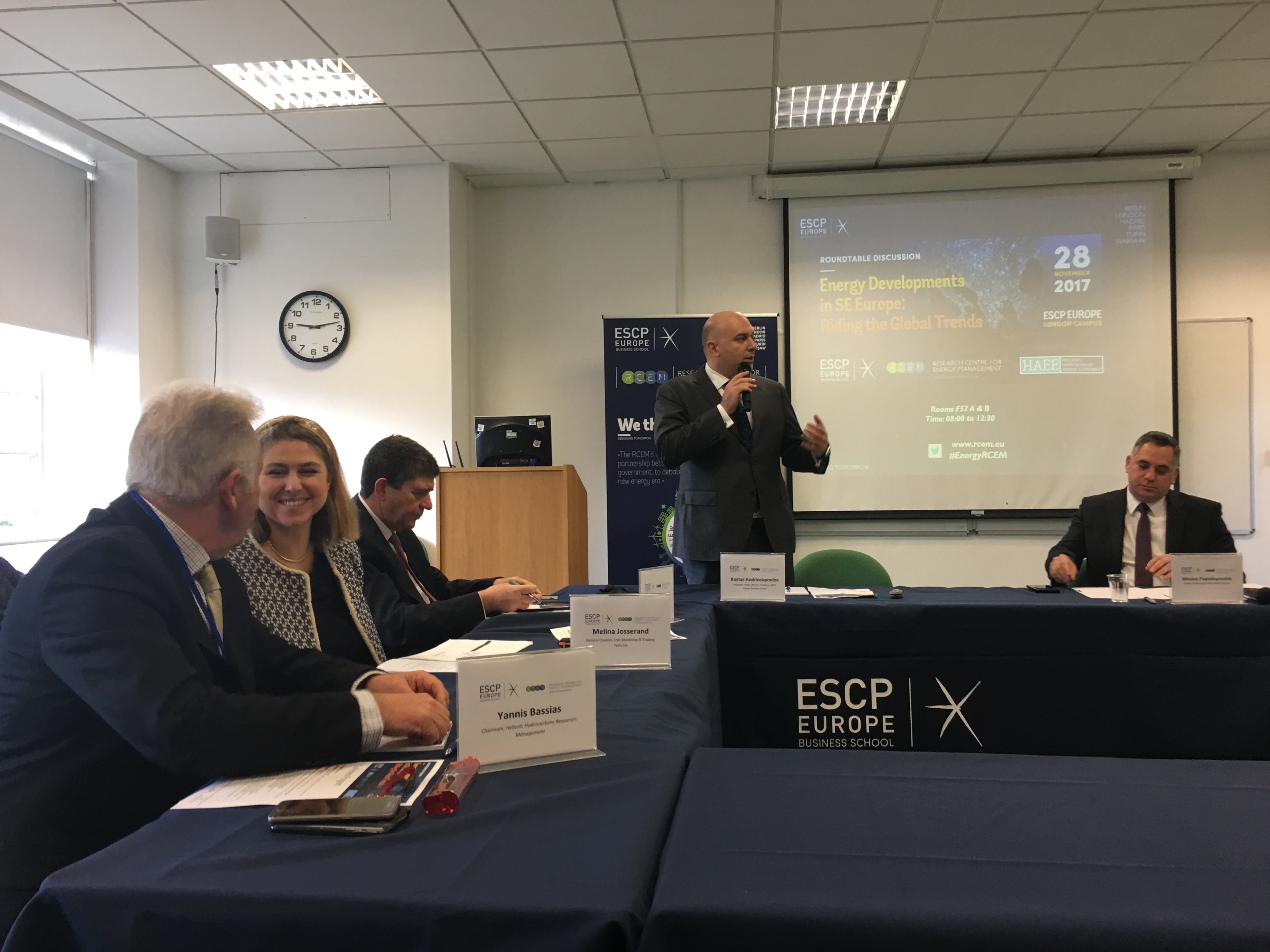 The investment, scientific, technical, bureaucratic and political environment for foreign energy investments in Greece presented through his personal experience as representative of TAP, the recently appointed director of the project, Richard Skoufias. The experienced manager of the complicated and demanding program for the construction of the Greek section of the Southern Corridor for the transportation of Natural Gas from the Caspian Sea and other sources to Europe underlined the fact that TAP has been accepted in practice by the Greek society and its leaders at regional and central level, resulting in its smooth implementation. TAP, he stressed, is a model of successful foreign investment in Greece because it has been a concern to cover the specificities of local communities.

The interest of foreign companies to invest in Greek energy was transferred by Melina Yosserand, spokesman of the American shale gas exporting company Tellurian Inc., who has asked to participate in the plan of the LNG floating station in Alexandroupolis to promote US gas to Bulgaria and the north. The energy program of Alexandroupolis, which also includes DEPA, is an immediate goal for the US side.

The plans and intentions of the international energy community for hydrocarbons in Greece and Cyprus were transferred by the President of the International Gas Union Mel Ydreos. He underlined that the Eastern Mediterranean region is mature for direct investment in research and exploitation of natural gas and that the theoretical obstacles and objections from time to time are due to political considerations which should not interfere with the smooth functioning of the free market. 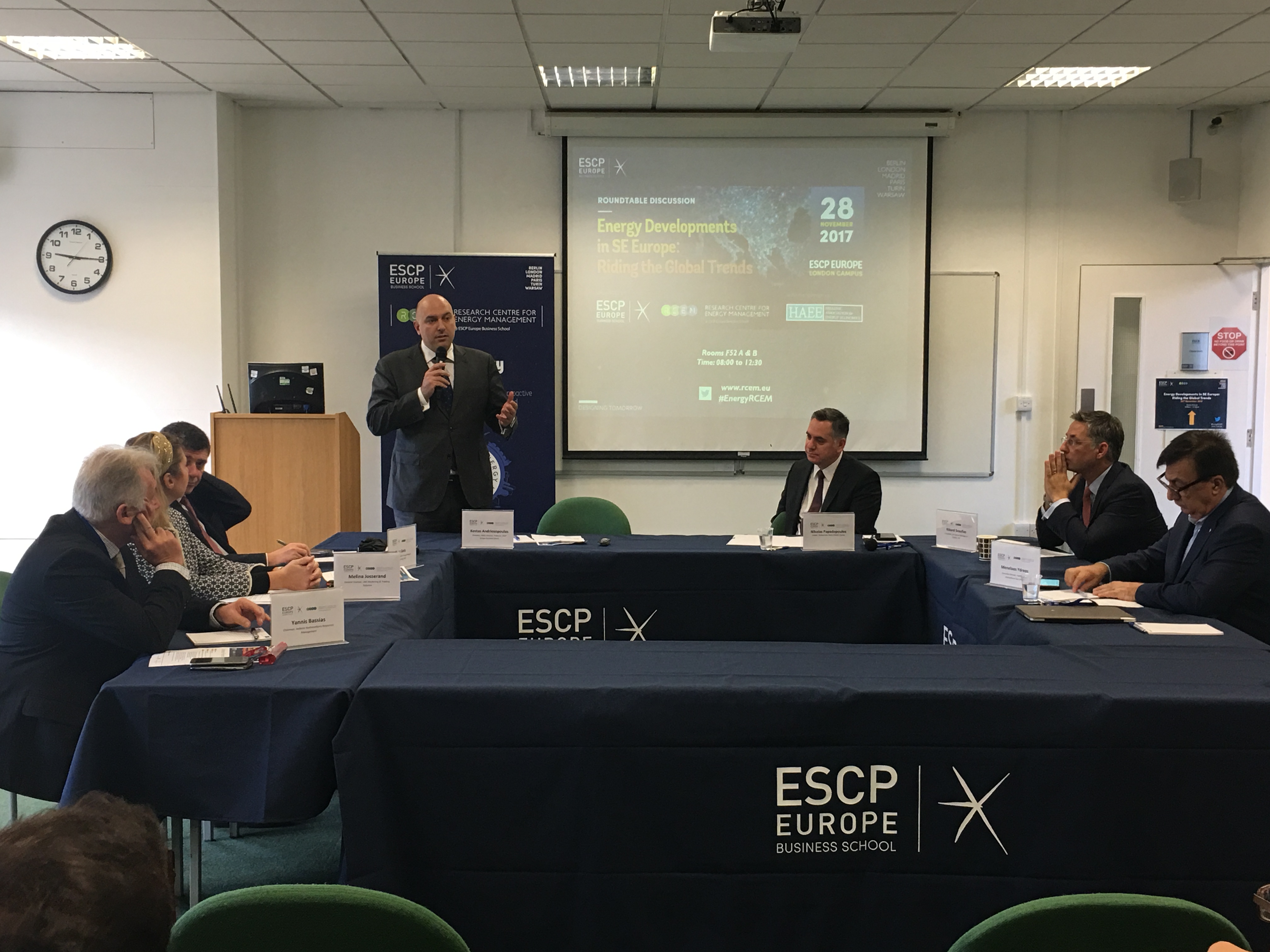 The Head of Energy Strategy and Planning, energy consultant Tasos Garis recapitulated the conclusions of the conference and added the important factor of electricity and alternative forms of energy, which are a prerequisite and a need not only for the protection of the environment, but also for rationalization in many aspects, including economic and energy support to the modern society

BACK
PREVIOUS NEXT
CORPORATE MEMBERS
VIEW ALL
Menu